Since it's too hot to garden, and I'm caught up on Game of Thrones and Hell on Wheels, I thought I would update my blog.  Here is a sampler that a French designer/stitcher graciously shared as a SAL last year - I have lost my notes so I can't give proper credit.  I used HDF silks, and used the blues and reds in different places than the designer intended: 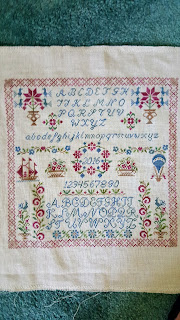 This is a little ornament front from 2015 JCS Ornament issue.  It was my first time to use the dotted linen - it was not difficult once I learned to stab stitch rather than try to do a sewing stitch: 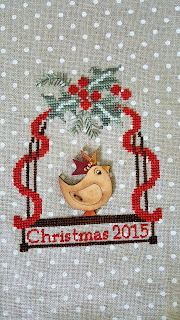 Here is another ornament front - this is Cherished Stitches Winter Garden.  I used the threads that came with the kit; but exchanged the linen for a 40 ct and used one strand.  The over one portion was done with Tudor silks (date).  It doesn't look as garish in real life. 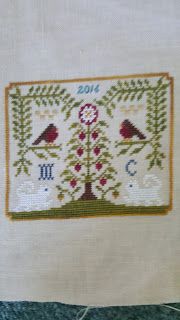 I am also continuing to work on my sampler - I just finished part 8.  The rest of the stitchers are on Part 12, I believe.  Not sure why this picture keeps flipping 90 degrees. 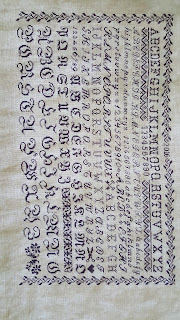 I am also posting some pics of my yard.  These were taken in May.  The first is the front of the house - the decorative alliums and the koi pond: 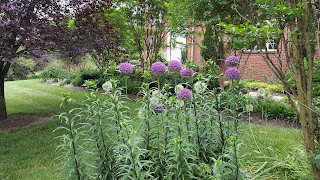 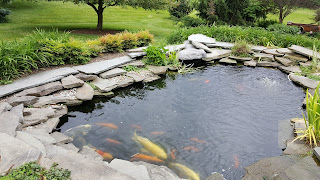 One of my Itoh peony bushes (a Costco special): 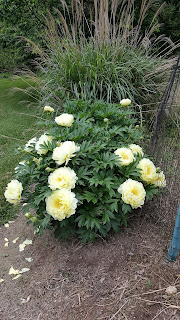 Siberian irises  in the side yard: 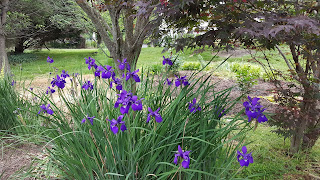 And DH with a fawn he found while mowing - the fawn had become trapped in our old garden space - the space was originally fenced to keep out the deer - but now we don't use the space - and it has been taken over by miscanthus (and deer apparently.)  DH turned the fawn loose in the edge of the woods in our back yard - we haven't seen it, so we assume its mom found it. 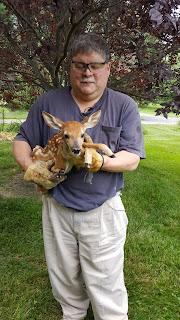 OK, better go and pack - we're off to Sydney, New South Wales next week - I get to see DS in a few days!

The French sampler is gorgeous. So is your Koi pond. You do not have problems with predators? Your garden is lovely.

What lovely garden pictures you shared! Your finishes are super and I really like your WIP. Have a safe journey!

The above article is nice and interesting, thank you willing to share! Greetings success of admin cetak murah jakarta wish you deign to visit my website, thank you :)