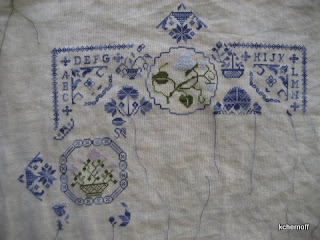 This is Quaker Star Part 4 - I'm still uncertain about the addition of color to the flowers, stems and leaves - it makes the piece very "busy" - but I don't want to unstitch any of it, so I will leave it as is. The center medallion is a unicorn; which I am not too crazy about - I may substitute a swan motif if I can find one the right size.
I signed up to stitch a blackwork project with the Sticklounge group; but Halloween stitching is calling my name, so I may stitch a small Halloween project instead.
I also have stitched a little bit on the Drawn Thread's Wayward Garden - I will post a pic in the near future.
Happy stitching! Margaret
Posted by Margo's Musings at 2:42 PM 1 comment: 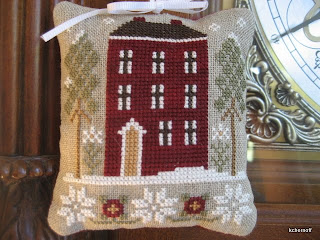 Here is my ornament for August - Red House in Winter. It is one of the All Dolled Up ornament series by Little House Needleworks. I used the recommended fiber for the house and the recommended linen. After that I was tired of fighting the knotty thread and stiff linen; so I stitched the rest of it in HDF premium silk. What a relief! 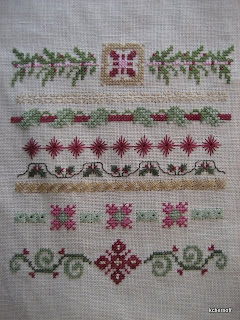 Here is the first part of a new SAL that I joined - it is titled Joyeux Noël Bannière by Angie Designer . I have been admiring her projects and this is the first one I've signed up for. I am using a piece of Light Cappucino Cashel linen and HDF Premium silk in the Enchanter Rose, Luteous Green, and Oil of Amber series. This piece has a lot of specialty stitches, which I love.

During the last two weeks, we have been on vacation. We traveled to Moscow, Russia. We hit many of the "tourist spots" - the Kremlin, Red Square, Pushkin Museum, Gum, etc. The language barrier was a struggle; but we found many restaurants that had menus in English, and many of the younger generation of Russians could speak English (certainly their command of English is much stronger than my command of Russian). I have been struggling with an awful head cold since we returned. In fact, I missed two days of work because I just could not function. I will post some pictures from vacation once I start feeling better.

LA left a comment on a previous post, asking about the Sticklounge group on Yahoo. The address of the group is Sticklounge; and the e-mail address is Sticklounge@yahoogroups.de. I need to get stitching on my Quaker Star - I think the next part comes out soon.
I hope everyone in the States has a relaxing Labor Day!
- Margaret
Posted by Margo's Musings at 4:00 PM No comments: